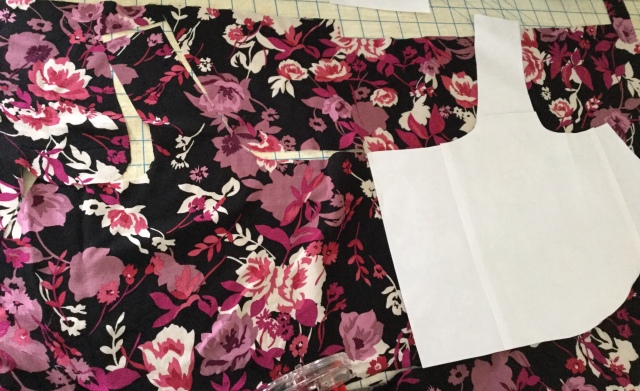 The second mistake was cutting the last skirt panel 2″ shorter than the first 2, but that would be okay…because of the first mistake. Two purple floral rayon fabrics were set out; one for a Sis Boom Carolina Mae and one for a BHL Anna. At least using the wrong fabric meant that there would be enough to recut the panel and use the miscut for bias binding. Back on track until I did a classic flat cutting mistake where the pattern piece goes off the fabric when you flip it over to cut the second half. At least mistake number one is still working in my favor. The fabric guidelines for the Carolina Mae are my one complaint about the pattern now that fitting is complete. With so many options it’s hard to figure out how much fabric you need for the version you are making. It turns out that I need about 1/2 yd. less than is called for on a longer sleeved version in the instructions-that is if I didn’t make so many mistakes.  Slow progress on my #2018make9